Covid-19 has upended millions of jobs and many have been forced to make the abrupt change to working from home. It’s been almost nine months at the time of writing since the World Health Organisation declared a pandemic, and in this relatively short period of time remote working has become normalised. It’s the first time in our collective history where personal and professional networks have moved onto virtual platforms en masse. The world of work has undergone a paradigmatic shift, even if we don’t yet know exactly how this will transpire.

We’re presented with the opportunity to reimagine the traditional 9-5 and the ways in which businesses are run. For some, cost-saving strategies and time-efficiencies will prompt the shift to a remote workforce. According to Global Workplace Analytics, around 25 to 30 per cent of the global workforce is expected to work from home multiple days a week by the end of 2021. Coworking offices are therefore likely to appear as hubs and pockets integrated into existing spaces. The potential scope and scale of the idea is enormous – it could extend far beyond the typical hotspots of remote work in hotel lobbies and cafes to include retail such as garden centres and leisure facilities such as gyms.

Viewing this cultural shift from a hotel lens, there’s great opportunity to attract the growing remote workforce. Buildings will be conditioned to address the flexibility of workers, for example reconfiguring communal spaces to better accommodate working needs. Third-party hot desk operators such as AndCo and BYHOURS partner with hotels to help drive that much-needed revenue. Simultaneously, the pandemic is ushering many professionals to move out of city centres. B2C marketplace Anyplace is observing this trend across its platform in the US, which will lead to a change in relationships with secondary and rural locations. Countries like Barbados, Estonia and Georgia have all introduced a digital nomad visa to attract the emerging anywhere worker. The office will no longer be static but a dynamic and mobile setting.

2. Repurposing hotels and their spaces

Empty guest and conference rooms, unused banqueting halls, and other under-utilised space has prompted owners and managers to reimagine functionalities. I’ve seen several hotels here in the UK refurbish meeting rooms into fully equipped studios. Royal Lancaster London invested £1.8 million in kitting out its XR Mixed Reality Production Studio, and Pennyhill Park unveiled The Event Studio with TV cameras, stage lighting and production facilities. When it comes to hosting events, planners now expect venues to support hybrid experiences and rank technology as an important consideration on both the planning and delivery side. Those repurposing now will be better positioned in early 2021 to capture business demand throughout next year.

Vacant office blocks and retail stores also offer the chance to convert. Hotels in tourist-heavy gateway cities remain an attractive asset for investment despite the challenges they have faced thus far. In London’s Covent Garden, Manex Properties will transform a former office building into an Amano branded hotel, and The Portfolio Club will convert the entire Wellington block into one of several Residents’ Clubs.

Aligned with the staycation surge, Deloitte reveals Cambridge, Oxford and Edinburgh as the top three attractive cities in the UK for hotel investment in 2021. Honing in on Oxford, Graduate Hotels is set to debut one of its first European properties here early next year. With further development activity expected such as the repurposing of Boswells department store into a boutique hotel, the city and others like it could witness a growth in supply relative to high demand levels.

The resilience of serviced apartments has been largely observed during the pandemic. In the States, the extended stay hotel sector has outperformed the overall hotel industry in Q3 of 2020 according to the latest report from The Highland Group. In fact, early preliminary data from back in April revealed that extended stay properties were suffering far less than their traditional hotel counterparts, with the crisis creating additional demand for longer visits.

In response to this trend, several hotel brands have introduced an extended stay offer. Names such as Ace Hotels, Four Seasons, 25hours Hotels, Banyan Tree Group and Red Lion Hotels have all diversified into this market. Whilst some are adapting and expanding their base product, others are innovating and launching new identities within the space.

AKA Serviced Residences, which also operates a hotel in New York, saw a growth in the length of stay across its entire portfolio in all five markets: New York, Philadelphia, Washington DC, Los Angeles and London. Elana Friedman, chief marketing officer at AKA, said: “We are seeing even shorter booking windows than we have experienced over the past year, in many cases, inside of one week. This is understandable as travellers are not willing to commit to long term travel plans if there is any risk. Our guests are traveling less frequently, but staying longer, and compressing as much as they can into their stays – whether personal or business travel. We are also finding that many guests, at this moment, want less engagement and more privacy.

“AKA always catered to three key segments: business, leisure, and lifestyle transitions, such as home renovations, medical tourism, temporary assignments, relationship changes etc. The third segment  is seasonless, less impacted by world events, and an important category for us. Likewise, some of our top corporate clients, whose offices remain closed, have secured blocks of suites for their employees who need a more productive work (work/life) space than their home. These companies are seeking a secure, quiet, private environment with ample work-space and super-fast secure wifi. AKA expects this trend to continue to some degree, even as offices gradually reopen.”

The crossover of hotels and apartments is set to become more frequent and more broad. All five of the largest hotel groups (Wyndham Worldwide, Choice Hotels, Marriott International, InterContinental Hotels Group and Hilton Worldwide) have managed extended stay hotels for many years. Changing traveller needs as a result of the coronavirus is merely accelerating the transition amongst smaller brands.

4. Explosion of the subscription economy

The disruption to travel and sharp drop in footfall has compelled many hospitality businesses to seek out new revenue streams and as a result there’s been a flurry of activity within the subscription space. The model leverages a longer-term, fixed variable compared to the reliance on transient trade, and several hotel brands have jumped on the bandwagon.

Concurrent with the burgeoning anywhere worker is the introduction of daily, monthly or annual work and travel passes. citizenM led the charge on this front, launching its corporate subscription and global passport. Marriott, Accor and Karma Group are among other big names to have implemented similar payment plans. It’s unsurprising that efforts are focussed on the lucrative business traveller – MICE was a significant source of income for hotels prior to lockdown and social restrictions. In effect, it’s a resourceful move for hotels to monetise the way they already operate.

Looking wider afield, travel group Inspirato claims to be one of the first operators to adopt a fully subscription-based model. Offering two separate memberships, travellers have access to hundreds of five-star hotels, luxury private homes and experiences either on an all-inclusive basis or for additional nightly fees. It’s the first I’ve seen where a subscription service spans different accommodations on a global level, and it’s a strong indicator that it may well become subsumed into other segments of the travel industry too.

Just as a rolling monthly subscription provides a stable stream of income, dark kitchens can allow for the continuation of operations (on a takeaway basis) when dine-in venues such as hotels and restaurants are forced to close. Also known as ghost kitchens and satellite kitchens, the model works by leasing a secondary site such as hotel kitchens, shipping containers or other industrial units to cook and produce meals for consumption on-premises and elsewhere.

Companies such as Flipdish, which specialise in online ordering for restaurants, witnessed increased activity during the first UK lockdown from hotels that were looking to set up a digital ordering system. This tells me that there’s appetite from hoteliers to expand their business, and where the concept of dark kitchens has potential. Whether hotels utilise their own menu from a delivery hub, or partner with third-party vendors that develop their own recipes and food brands in-house, its scalability and scope can improve weekly turnover and lead to a strong ROI.

The online component of dark kitchens also correlates with the growing preference amongst travellers to use a hospitality app. In a study by Criton, 47 per cent said they would be more likely to take advantage of room service and 48 per cent more likely to visit the hotel restaurant if they could order via an app. New York-based Butler Hospitality is already riding off this trend having reached more than 35,000 hotel rooms across New York and Chicago. CEO and founder Tim Gjonbalic said: “Essentially, we lease restaurants inside full-service hotels and assume responsibility for staffing, brand standards, and logistics. We then transform the back-of-house into delivery hubs that have virtual room service to nearby hotels. With the ghost kitchen trend on the rise, we are continuing to expand our services soon to Miami, Washington DC, and other cities in 2021.”

The weeks and months we have individually and collectively spent in lockdown has shone a bright light on the local community. There’s been a global effort to support and serve those most in need. The Hoxton in LA and Portland offered rooms to wildfire evacuees, and Rosewood hotels in Bangkok and Miramar Beach created a food delivery service for frontline workers. The act of giving back is feeding into the much larger and deep-rooted trend of regenerative travel.

In a nutshell, regenerative travel is about actively improving the social and environmental conditions of the area, region or country that someone is visiting. In this respect it goes one step further than sustainability – its entire premise is about building back better. Luca Franco, CEO of Luxury Frontiers, describes the biggest cultural behaviour shift stemming from the pandemic as “travelling with purpose” and believes this will manifest itself in “greener, smarter, and certainly less-travelled” trips. “Regenerative travel… is to leave a place in a better condition than when we found it,” he said.

A survey by Clink Hostels also revealed that 86 per cent of respondents felt that companies should do more to challenge social, political and environmental issues. With this in mind, those hotel brands that are championing and supporting specific causes are most likely to resonate with travellers. The introspective swing in consumer taste will drive closer affinities to brands that uphold shared values, and I suspect other businesses will seek to cater to this behavioural change – we’re already seeing Hyatt Hotels rolling out its Hyatt Loves Local initiative worldwide. The seeds for sustainable solutions were planted long before the pandemic; the green shoots of regenerative travel are now sprouting.

Interested to hear more? You can watch a recording of the Boutique Hotel 2021 Trendsetter webinar here. I was joined in conversation by:

Here’s my 2020 travel trend predictions – how did I get on? I’d love to hear your thoughts: email eloise@internationalhospitality.media and let me know. 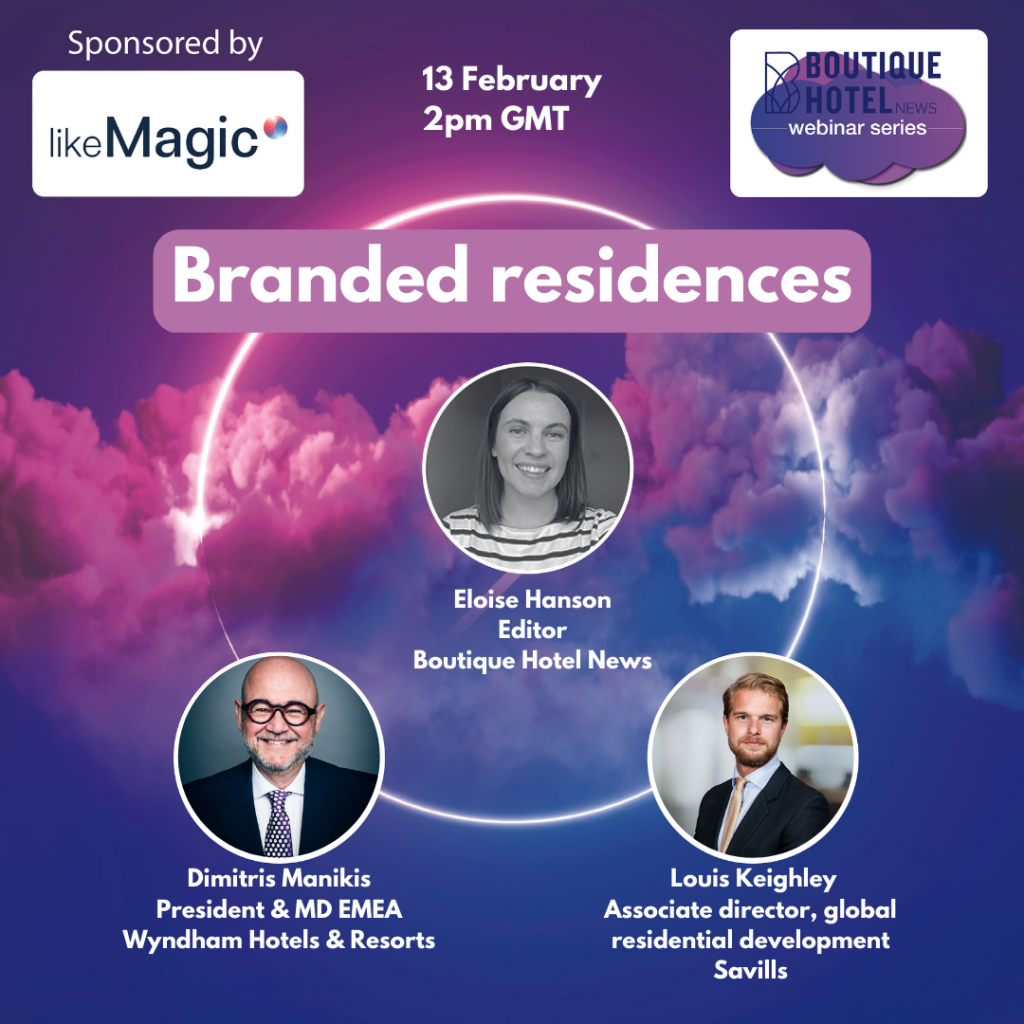