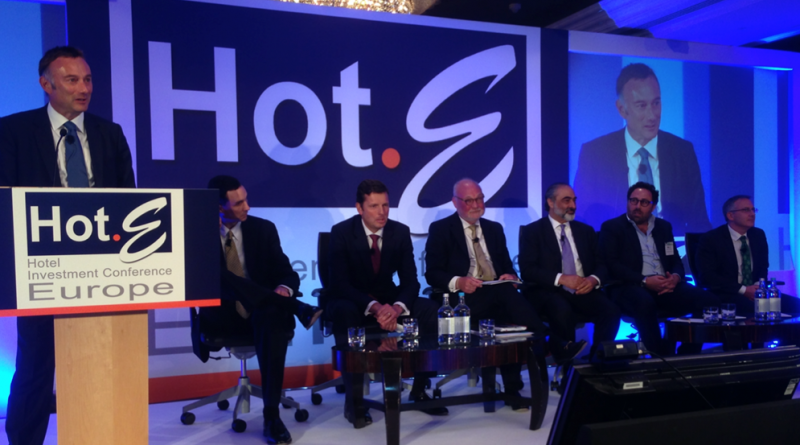 Europe’s Recovery: A mixed picture
Jim Burba of Burba Hotel Network, the conference organisers, opened the conference proper and reported feedback from a survey that Europe is in far better shape than in recent years. 48% of respondents in the EU said they saw the economy remaining flat in 2014 while 46% said it is growing. 73% said they are somewhat confident in 2014 while RevPAR growth is recovering in the UK, Spain, Turkey, Germany & Ireland in 2014.

Outlook for Europe: Still and age of instability?
David Smith, economics editor of the Sunday Times reflected on the seventh anniversary of the worst economic storm in history and that “it’s taken a long time to get over it”. He added “We have successfully come through three crises: the bank crisis, the sovereign debt crisis, and the macroeconomic growth and competitiveness crisis,” and that “unemployment is starting to come down across Europe but unfortunately Spain and Greece levels are still too high.  Smith also remarked that “Ireland in particular, has shown exceptional growth GDP forecasts up to 5% however France and Italy are pulling down the overall EU average rate”. He singled out Italy which has only grown 3% since Euro introduction 15 years ago (in reality 0% growth) and said that Italy is in its third recession in six years. Smith compared this to the German economy which is up 18% and Britain up 30% in the same period; Smith declared himself “happy with predicted 2% to 2.5% GDP growth in the UK”.

Elizabeth Winkle, managing director of STR Global & Mark Clacy-Jones, VP of research, for MSCI/IPD joined the panel on HOTEL PERFORMANCE AND OUTLOOK IN EUROPE. Winkle started with a warning that “anyone expecting me to say that we will see 10% revenue-per-available-room growth over the next 12 months will be disappointed,” bursting everyone’s bubble with a lowly 4.4% growth forecast. Winkle also noted demand will increase 4% to 4.5% in the next 12 months and the “PIGS” no longer contains Ireland since it has exited its bailout programme. She is also optimistic for the UK regions which are also seeing a real boost. Pipeline: There are 1.32 million bedrooms in the global pipeline across world of which 11% are for Europe; UK +41k; Russia +26k; Germany + 17K; Turkey 13k; Italy +4k; (in advance of World Expo 2015 for Milan).

Clacy-Jones, declared that hotels are now part of the Retail, Office, Industrial and Residential portfolios and in a survey of 742 Hotels, total returns in 2013 were 6.6% (5.8% comes from income returns and 0.8% from capital growth). He noted that “hotels outperformed overall property since 2000 and are better than overall real estate properties”; Switzerland, Sweden and Italy are only countries where hotels perform below overall property index. He added “the UK is driving the European average” and prospects to 2020 are very encouraging.

THE MONEY HALL session comprised leaders from the International Hotel Investment Council (IHIC) that shared their views on current and future investments and investors in Europe. Cody Bradshaw, Starwood Capital said: “We managed to deploy most capital in last 24 months … only 12 months ago we were trying to explain provincial UK markets and now it’s the hottest market worldwide”. He also noted “the Malmaison and Principal Hayley deals late 2012 were bellwethers of things to come” as Starwood had first mover advantage, major hotel experience inside and since then cap rates have plummeted. Bradshaw opined that deals are more risky and he is “neck deep in NPLs” (non performing loans) and if you sense an opportunity you have to move quickly and “grab a deal”; sometimes 3 weeks for all cash deals. Some highly opportunistic  funds have 20% plus IRR rate hurdles and an 8% threshold before the “promote structure” kicks in but these are few and far between.

Tim Helliwell from Barclays Bank stated 2014 is the “year of the borrower” and that he is now refinancing five year deals after only 12-18 months after origination. Timothy Lloyd Hughes of Deutsche Bank said there has been “a remarkably quick turnaround … and we now are back to where we were on LTV’s but that interest rates will increase and nobody seems to be thinking about effect on cashflow and pro formas”. He also wondered out loud what about public hotel IPO’s?  Dalata Hotel Group raised €265m which is small but Scandic and Motel One could float and 2015/6 should see should interesting public hotels offerings.

Box Style Hotels & Silver Medals
Majid Mangalji, founder of Westmont Hospitality Group, mused that Europe is still behind the USA and Japan and while the UK is liquid, the EU lags behind. Billy Skelli-Cohen from Greenbrook BD Ltd is about to open the Mondrian in London on September 30, and he suggested that traditional “box style” hotel products are finding it hard to compete. We should “take note” of 14 sq m hotel rooms in Southwark such as CitizenM and alternative type hotels. Desmond Taljaard of London and Regional commented “its very tight to get deals secured and nobody remembers a silver medal winner so you have to complete quickly”.

Day 2 session 1 focussed on the UK hotel industry with Patrick Angwin of Horwath HTL commenting that many buyers are now paying for hotels above replacement cost which means “cranes will start swinging” and while the supply situation is “very benign” any new supply will be absorbed in London.

“Neverendum”
Andrew Sangster of Hotel Analyst chaired the session and hoped the Scottish referendum would not become a “Neverendum” Quebec style in reference to the 1995 secession campaign that was defeated but rumbles on to this day.

Camil Yazbeck from Patron Capital noted that hotel valuation trading multiples have increased drastically in last year “and EBITDA levels are up 12-14%”. Yazbeck added “there is lots of new money around and deals have been won since most are cash and can close with limited DD and they will go to final stage and close in two weeks and pay up front” He added “these are ideal from a sellers perspective”.

Ufi Ibrahim, CEO of the British Hospitality Association, reported that Chinese visitors to France and other countries are >1m but only 250k to UK so the visa situation is very constrained. She also berated the UK government for being only one of four countries in the EU not to support tourism by cutting VAT despite continuous lobbying by the BHA and the Sun Newspaper. The  BHA is calling for a 5% VAT rate that would according to Ibrahim “raise £4 billion in increased revenue to Treasury and 80,000 extra jobs over five years”.

“Frenemies”
Richard Lewis CEO of Best Western Hotels GB represents 280 UK properties and noted “confidence is definitely up” among his members. He referred to “Gen D” the “digital natives”  that require instant WiFi and that hotels like Moxy, Citizen M and Curio are the emerging brands to watch.  Lewis went on to state that competition is growing in the sharing economy – e.g. Uber, Air BnB and it will impact on our business: personalised service and technology will feature largely in the future. BW has seen double digit brand growth with 30 new hotels joining in 2014 but in a light hearted comment he said “the Americans came up with the word “Frenemies” in a reference to the OTA’s relationship with trade and that operators need to tread carefully to get the balance right in terms of sales mix.

Lean Management & Revenue Ninjas
Finally, George Nicholas of JLL Hotels and Hospitality noted “there is a tremendous weight of capital chasing investment” and that private equity firms are looking at capturing the upswing in economies since they have their “lean management” and “revenue Ninjas’ in place and in some cases are 100% vertically integrated to asset manage the entire portfolio internally.

The World Report:
Several concurrent sessions (too many to report here) ran on “affiliation flexibility” and “a focus on investors” but the conference closed with a special session focusing on what is happening with hotel investments around the world.  Investment experts from Singapore, UAE, and the USA updated the room on what is happening State side, in Asia and Africa/Middle East. Nihat Ercan of JLL Singapore said that 2013 was a Stellar year for Asian Hotel Investment (USD $8.0bn) and the challenge is the availability of product thus driving pricing. Cap rates have compressed down to about 7% overall with the Westin Singapore selling for USD$1.2bn per key and the Grand Park Orchard Singapore selling for $920m per key.

Rudi Reudelhuber of Hodges Ward Elliott Inc. reported price per key in the USA is still relatively low circa $200k. He also stated “Wall Street analysts are insistent that investments must be RevPAR and EBITDA accretive over yield” and “private equity is complicated and requires heavy lifting”. In the USA capital markets are generally positive; in 2013 banks originated $31bn in hotel loans nearly double that of 2012 and also saw the return of the CMBS (commercial mortgage backed securities) market.

Filippo Sona of Colliers International (MENA) illustrated the difference between Africa vs the Middle East: Africa has 4,310 hotels 512,000 rooms and future supply of 240 hotels 48,000 keys; while the Middle East comprises 3,375 hotels and 412,000 keys but future supply of 544 hotels and 32,000 keys in the pipeline. In the Middle East, Net Initial Yields (NIY’s) are 7.1 – 7.8% while in Africa it is 10-11.34%. Sona also captured the delegates’ attention reporting that in 2013, 32% of European hotel transactions came from Middle Eastern buyers and that already at H1 2014 stage this is +25% and more capital will flow to Europe, Germany, UK, France, Spain and Eastern Europe due to political uncertainty. The sector to watch for in this market is Serviced Apartments which are growing in popularity and are Sharia Compliant.

Weldon Mather is an independent hotel asset manager and tourism consultant in the hotel, restaurant and pub sector. He works with clients in throughout the UK and Ireland including banks, owners and managers, receivers/administrators, liquidators and investors. Contact: www.wmconsultancy.eu